The Value of a Parent

We know that you can't put a value on the emotional importance of a parent to their children, but the work parents do around the home on a daily basis is often under estimated and undervalued.

Recent studies suggest that homemakers are the happiest and hardworking of all occupations in the UK.

On average, they work 66 hours in a five day week with tasks like childcare, cooking and cleaning taking up the majority of their time, and the Office for National Statistics values the work of a homemaker at £38,162 a year*... but this is overlooked and unprotected.

Whilst homemakers are happier than people working in any other occupation, they're not immune to accidents or illness.

What would the impact be on your finances if the homemaker were to be incapacitated?

The latest Legal & General research estimates that the cost of raising a child to the age of 18 is £123,365 - but it would be a different picture if one parent suffered a serious or critical illness.

The Legal & General study also found that the average parent spends £27.15 on treats and entertainment each week, but only £4.82 on insurance!

If the balance of the above spend was allocated towards more insurance, families could be better protected and parents would have the peace of mind of knowing that if the worst happens, they have the financial security to deal whatever life throws at them. 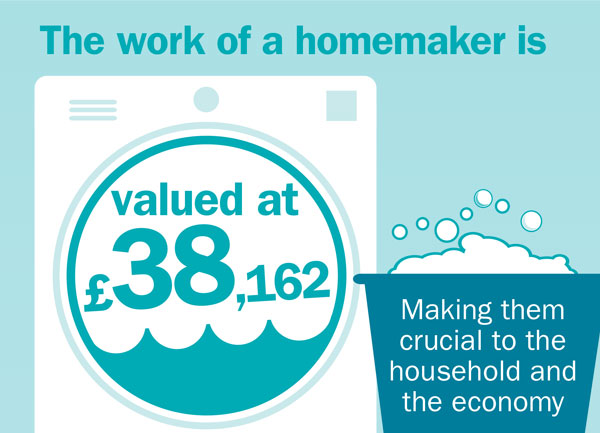